My wife (and two dogs) moved to NYC from the Bay Area on Jan 4, 2011.  I remember arriving in NYC, after a large snow storm, the streets were will filled with several feet of tall snow banks, it was a very different living environment than the warm Bay Area.

In mid 2010, when working out of the offices on Sand Hill Road in Menlo Park, I convinced my boss at the time that NYC was going to have an exciting startup scene and that I wanted to be part of it and that is would be great for the organization as well.  At the time, the SVB NYC office had a small team on the ground, around 7 or 8 people, now there are over 120.

Nine year later, the data via CB Insights highlights the momentum of the local startup scene over the past nine years. 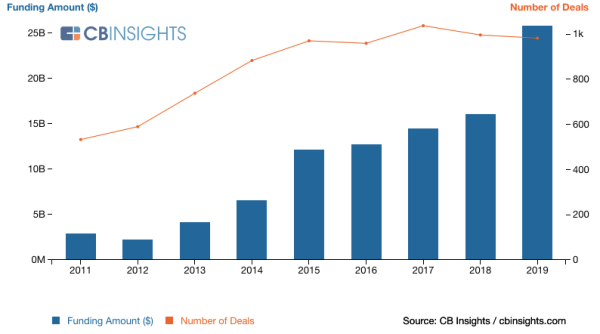 I didn’t anticipate that the NYC would be THIS robust when I moved here, but I’m glad it is.  Moving here was a sound decision, both personally and professionally.   There continues to be a lot of upside for the local scene and I expected the numbers to continue to go up over time.

One thought on “9 years in NYC”