I have heard great things about previous SXSW conferences, so I decided this year to check it out for a few days and see what all the commotion was about.

The great thing about the location of the conference, in Austin, Texas, is that it is in the central portion of the U.S., which provides a great opportunity for a diverse geographic mix of companies/people to get together.  I met folks from Seattle, Portland, Bay Area, Austin, Dallas, Nashville, Boston, New York, Chicago, Philadelphia, Los Angeles.  There were a lot of people from the Bay Area, which is interesting as it begs the question as to why Bay Area people fly to Austin to hang out with a lot of Bay Area people they already know, which is what I observed.  My theory is that when Bay Area residents sign up for a local conference, they become distracted with a lot of things and are not fully engaged in the conference and therefore there is less networking.  By flying out-of-town to Austin, you minimize the distractions and therefore allow for a more engaged experience.  The ironic thing is that I met a lot of high-profile Bay Area people who I normally don’t interact with in the Bay Area.  After attending many major conferences across the U.S., this is certainly one of the best, especially for web-based companies.  I will attend the conference next year and hope to plan one of the better evening events, one that will be geared toward startups and VCs.

I’ve highlighted a few keys areas that are important for having a successful SXSW and also indicated what I would do different next year.

Lodging: I booked my place 10 days before the start of SXSW, which I knew was going to be challenging as I heard that all the Austin downtown hotels were sold out.  I checked out Kayak.com and it was true, every single room in the downtown area was taken.  Luckily there is a startup that provides alternatives to hotels, I used AirBnB.com.  I found a loft that was 2 miles away from the convention center, the cost was $125/per night.  The loft was great, it had 2 bedrooms, kitchen, living room, etc.  The challenge with being out of a short walking distance is that you have to rely on taxis, which are in high demand during SXSW, so staying somewhere that is in walking distance is highly recommended.  The cost of the taxi ride from the loft to the convention center was about $10 each way, not too bad.  The best place to stay, assuming cost is not an issue is the downtown Hilton, which is located across the street from the Austin Convention Center.  The Hilton also hosts several of the official SXSW panels and there were a lot of great networking opportunities in the lobby area.  Next year, I hope to stay at the Hilton and will book my accommodations as soon as SXSW announces their 2011 plans.

Networking:  The best part about the conference for me was not the content, panels, keynotes.  Networking with people who I’ve met before and also meeting new people was the high point of the trip.  You need to bring a lot of business cards as I was exchanging cards constantly (or you can use Bump mobile application, very useful).  My networking started before arriving to Austin, I met several good contacts at my departing airport in Oakland.  I spent a few minutes with a well-known angel investor, Chris Sacca and also sat next to Gareth Hornberger who runs the social media strategies for Levi’s.  You can meet great people everywhere; airports, lines, restaurants, bars, sessions, streets, etc.  Most of the people who I interacted with were relevant to what I do and plan to follow-up with many of them.  A key for maximizing the networking opportunities is to follow-up immediately with people you have met at the conference.  If you wait too long, the person might forget who you are or the context of the conversation you had with them.

Attire: If you are representing a brand, startup, corporation, I would highly recommend getting some t-shirts printed with your logo and tag line.  I had several SVB shirts created for SXSW and it was worked out well.  People were asking about my company and what we do.  I also had clients of SVB come up to me and they were excited to see someone from SVB in the crowd.  As soon as I arrived in Austin, I went immediately to 6th Street to check out the downtown area.  I found a really cool store that specialized in selling hats.  I bought a neat looking straw hat and wore it the entire time during the conference.  When I was trying to connect with people who I’ve never met before, I would just say “look for the tall guy with the straw hat”, it made things a lot easier as it is really challenging to connect with people as the crowds are so large.  The conference is really casual, so jeans, t-shirt, sneakers are fine.  People were also wearing shorts as the weather was very nice at certain times.

Events:  The best part of the conference is the evening events.  This was one of the most challenging aspects of the conference as there many events occurring at the same time and some were much better than others.  Some of the hyped parties, had very long lines to get into, which was not fun at all.  I tried finding events that were not as hyped up.  There are great people everywhere, so you don’t have to go to the “hot” party to have good networking.  Finding the right parties take some preparation, so I would recommend talking to your contacts and creating a game plan before each evening, otherwise it is overwhelming (use Plancast to make life easier).  If you just want to hang out with people you already know, then there is not much advance planning needed as you can find a lot of bars to hang out and listen to music, dance, play games, chill out, etc.  The best evening event for me was the First Round Capital bus trip to Salt Lick, a famous BBQ joint outside of Austin.  Everyone on the bus seemed to be of high-caliber and met several new people that I will be following up with.  Luckily I was able to get an invite to the bus trip as I ran into Rob Hayes (a Partner at First Round) the night before and he invited me, so was very fortunate.

Planning:  Several weeks ahead of time, figure out who is going and who you want to spend time with.  I would suggest going with a friend as it is not too fun to hang out on your own, although you can meet people everywhere.  I didn’t go to SXSW with anyone in particular, but I knew a lot of people who were attending and made plans to hang out with them several days before arriving.  I would suggest making plans at least a few before the trip as people to book their dinner/lunch/breakfast plans well a head of time. 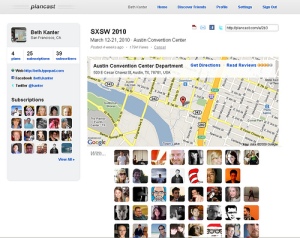 technology/Tools: I would recommend several mobile applications to make your experience much better: Foursquare, Gowalla, Plancast, Yelp, TripIt, Echofon, Bump, Evernote.  I used Foursquare, Plancast and Echofon the most and all severed as way to coordinate which events to attend based on where your contacts are currently located or places they plan to go to.  People were using both Foursquare and Gowalla to “check-in” but next year, we need to have a mobile application that aggregates all the “check-ins” so you don’t need to go back and forth on multiple applications.  Given that using a smartphone is critical for a good networking experience, you are going to run your battery down very quickly, so would suggest bringing a charger with you at all times and even an extra battery pack, which are available as add-ons.

Length of Stay: Two days during the Interactive portion of SXSW was sufficient for me.  Next year, I will plan two days for the Interactive portion, but would like to stay an additional two days for the Music portion of SXSW. I spoke to several people were at SXSW for three, four, five days and most said they were pretty exhausted.  Attending the conference for two days allowed me to have sufficient energy to go to many events without being worn down, which can make you less efficient.

VCs and Angels and Incubators: I wasn’t sure how many investors would be attending, but I ran into or saw many firms/individuals: Accel, First Round, CMEA, Sierra, Canaan, Benchmark, Bessemer, Shasta, Emergence, Founders Fund, SV Angel, Baseline, Dave McClure, Chris Sacca, Dan Martell, Dharmesh Shah, Alsop Louie, DFJ, Norwest, Rembrandt, Techstars, YCombinator, CapitalFactory, Bootup Labs, Venture Hacks.  A lot of them tend to hang out with each other, so the trick is finding a few of them and then you will meet some of their buddies who are also investors.  There were also several events that were VC sponsored, I already mentioned First Round and Canaan Partners had a good event as well.

Tight budget: find other people who are attending SXSW and split the cost of a local hotel that is walking distance to the convention center, that way you don’t spend money on taxis.  You can easily have four people to a room and you are not going to spend much time in your hotel, so no need to get your own bed, bring a sleeping bag and crash on the floor.  If you are on a tight budget, you don’t necessarily need to buy a pass for SXSW as I found that the most of networking opportunities takes place away outside the conference.  You can hang out in the lobby of the Hilton, hang out near the convention entrance and attend a lot of the parties as many of them don’t require a badge.  A lot of the parties that require a conference badge, provided free food and drinks, so it is certainly worth to get a pass solely for this purpose. I can’t speak to the content of the entire conference as I only attended two panel sessions and one keynote address, so I only spend a total of three hours at the actual conference.  There were not any major takeaways from the content sessions that I attended, but I’m sure there were some great sessions that were worthwhile.  I didn’t buy a pass this year as I wasn’t planning on attending any of the sessions, as I was focusing on getting work (emails/calls) done during the day and networking in the evening.  Fortunately, a contact of mine who was only there for a few days was leaving the day I arrived and allowed me to use their badge.  Next year, I will buy a pass and spend more time attending the content portion of the conference and will have a better perspective on the quality of the content.  Lastly, book you airfare well in advance as the flights get taken quickly and prices go up as you get close to the event date.  If you plan correctly, you can spend less than $750 (airfare, food, and lodging) for a meaningful SXSW experience.