As you may of heard, Goldman Sachs purchased United Capital, a wealth advisory firm, for $750M cash on May 16, 2019.  Goldman Sachs provided a visual of how this acquisition fits into their existing business, see below. 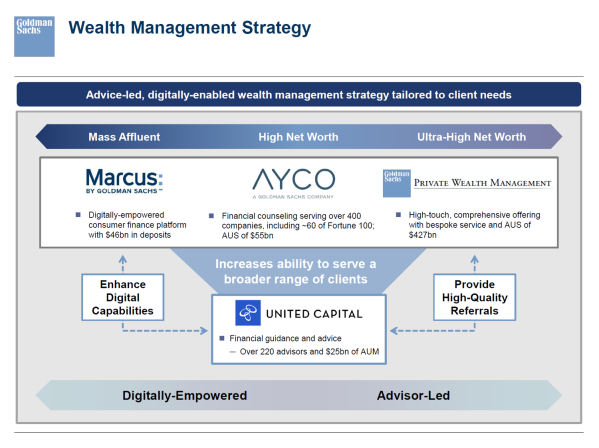 In the press release , it was mentioned that United Capital had $25B in Assets Under Managements (AUM), which got me thinking on how the digital advisory shops are doing in comparison, such as Wealthfront, Personal Capital and Betterment.  It also led me to think if this acquisition is a valuation benchmark for these companies.

I did a query on CB Insights to compare all four.

In order to really compare all four, you have to look at AUM and number of employees, to measure efficiency.

A few things stood out to me.

United Capital raised the least amount of VC dollars but has the greatest AUM.  I do recognize the United Capital is not necessarily in the robo advisor category, but I’m sure they would argue they have real technology, although they aren’t really a self serve platform, perhaps they are more of a hybrid.

All four are growing headcount at an almost exact rate, 18% to 24%, that is really surprising how uniform that is, there has to be some explanation to this, don’t have the answer for you though.

In terms of the three actual digital / robo advisors, Betterment has the great amount of AUM and has not raised additional in the longest amount of time (668 days), I wonder if they are cash flow neutral / profitable at this point.

I wonder what the exit opportunities for the remaining private companies, who buys them, do they IPO and at what valuations?

One thought on “Robo Advisors”